Objectives and Goals:
1. Drainage.
2. Drainage Basin, Water Divide and Perennial.
3. The Drainage System of India.
4. The division of Indian rivers (i.e. The Himalayan Rivers and the Peninsular Rivers).
5. The Drainage Pattern (i.e. Dendritic, Trellis, Rectangular and Radial Patterns).
6. The Course of the River and features formed by river during it's course.
7. The Himalayan Rivers (i.e. The Indus River System, The Ganga River System and The Brahmaputra River System).
8. The Peninsular Rivers (i.e. The Narmada Basin, The Tapi Basin, The Godavari Basin, The Mahanadi Basin, The Krishna Basin and The Kaveri Basin).
9. The Lakes and its value to the mankind.
10. The Role of rivers in the economy.
11. The River Pollution and how we can protect our rivers.
12. The National River Conservation Plan (NRCP).

Depending on the slope of land, underlying rock structure and climate of an area, the streams in a drainage basin form certain patters. Different types of drainage pattern are as follows:
1. Dendritic Drainage Pattern: When the river channel follows the slope of the terrain, it develops dendritic pattern. The stream and its tributaries resemble the branches of a tree. Hence, it is called dendritic pattern.
2. Trellis Drainage Pattern: When a river is joined by its tributaries at almost right angles, it develops a trellis pattern. Trellis pattern develops where hard and soft rocks exist parallel to each other.
3. Rectangular Drainage Pattern: When rocks are strongly joined, then rectangular pattern develops.
4. Radial Drainage Pattern: When the streams flow in different directions from a central peak or dome like structure, a radial pattern is developed.
It is important to note that a combination of different patterns may develop in the same drainage basin.

Course of a River:

The Drainage System of India
The drainage systems in India can be divided into two major groups:
1. The Himalayan Rivers 2. The Peninsular Rivers. 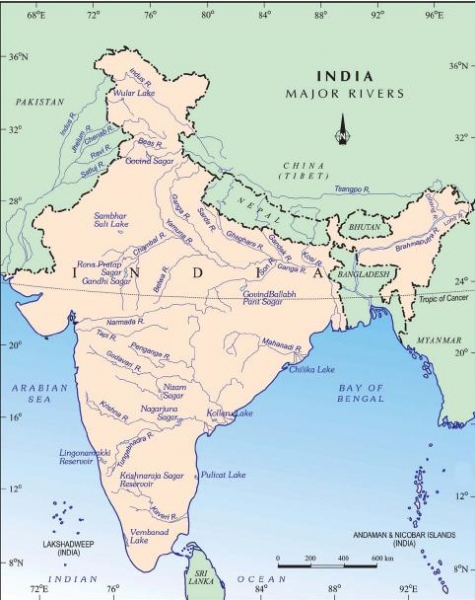 The main differences between Delta and Estuary are as follows:

Types of Lakes:
1. Ox-bow Lake: A lake formed when a meandering river is cut off from the mainstream. The shape of this lake resembles an ox-bow.
2. Lagoon: When the lake is formed by spits and bars in coastal areas, it is called a lagoon. Chilika lake, Pulicat lake, Kolleru lake, etc. are examples of lagoon.
3. Glacial Lake: A lake formed by melting of glacier is called a glacial lake. Most of the lakes in the Himalayan region are glacial lakes. Wular lake (Jammu & Kashmir) is the largest freshwater lake in India. It was formed by tectonic activity.
4. Man Made Lakes: These lakes are created by human activities. Gobind Sagar is a man-made reservoir situated in Bilaspur District, Himachal Pradesh.

Benefits of a Lake:
1. A lake helps in preventing flood by regulating the flow of river.
2. During dry seasons, a lake helps to maintain an even flow of the river.
3. Lakes can also be used for generating hydel power.
4. Tourism development.
5. Maintain aquatic ecosystem.

Role of rivers in the economy:

nikhil15 May, 2016this lesson is their in our text book

arjun16 July, 2016this lesson is there in our textbook. i like it

Priyangshu11 August, 2016thi sis amzing u should do this for science tooo it has helped me from 76 to 92 percetage love u u should publish ur own guide

VIHARIKA10 August, 2017THANMK U SO MUCH FOR THIS . IT REALLY HELPED A LOT

aryan07 September, 2017Nice and helpful thanku so much

Chinaisath Boro24 October, 2017Sir it's a gigantic task which is most useful for every success aspirant students, and will be better if there is such opportunity to get all the chapters

A01 December, 2017Thank you soooo mucchhh. You totally helped me a lot

Devanshi26 December, 2017everything was very helpful, but what I was needed I din't found it.

Humaira Ali28 December, 2017can u please give me the Mutiple choice questions of this chapter

Priyanshu03 August, 2018In this all chapter is covered. I like it so much

Sreeparna 14 September, 2018Thanks its amazing and really helpful😊

Kanishka23 November, 2018Thanks it's very helpful

Guddaraj02 February, 2019I really appreciate this one Because this is very important for KAS&IAS purpose

Ritwik12 August, 2019Thank you very much

Ritwik12 August, 2019Thank you very much

Shaktisahoo12 August, 2019Thank you very much better than a few months and I am going well as a bit

Arham Jain 18 August, 2019Thank you so much. Please make notes of other subjects also.

shruthi18 August, 2019thank you so much for this answers .it is very helpful and easy to learn

Satyam Kumar06 September, 2019Thank you so much. This notes help me very much