Q2. What is Agriculture?
Ans: The science and art of cultivation on the soil, raising crops and rearing livestock. It is also called farming. The word "Agriculture" has been derived from the Latin word "Ager or Agri" meaning "Soil" and "Culture" means "Cultivation".

Q4. What is a farm system?
Ans: Agriculture or farming can be looked at as a system.
(a) Input: The important inputs are seeds, fertilisers, machinery, labour, etc.
(b) Process: Some of the operations involved are ploughing, sowing, irrigation, weeding & harvesting.
(c) Output: The outputs from the system include crops, wool, dairy, poultry products, etc.

Q5. Define types of economic activities.
Ans: There are three types of economic activities. These are:
(a) Primary Activities: Connected with extraction and production of natural resources like forestry, agriculture, mining, animal husbandry, etc.
(b) Secondary Activities: Connected with processing and manufacturing of primary goods into finished goods. They get raw material from the Primary sector. For e.g. Iron ore into tools & machines, sugar cane into sugar, etc.
(c) Tertiary Activities: Provides support to Primary and Secondary sectors through services, e.g. transportation, banking, tourism, etc.

Q6. Write a short note explaining the different cropping seasons.
Ans: There are three major cropping seasons, i.e. Rabi, Kharif and Zaid.
(a) Rabi: Crops are sown in winters between October to December and harvested between February to April. Major crops of this season are: wheat, barley, peas, gram, and oilseeds.
(b) Kharif: Crops are sown in summers between May to July and harvested after rain i.e. between September to October. Major crops of this season are: rice, maize, jowar, bajra, sugarcane, jute.
(c) Zaid: In between Rabi and Kharif crops zaid crops like: watermelon, cucumber are grown between April to June.

Q7. What is Agriculture Development?
Ans: Agricultural Development refers to efforts made to increase farm production in order to meet the growing demand of increasing population. This can be achieved in many ways such as:
(a) Increasing the cropped area.
(b) Multiple cropping (Number of crops grown in a year)
(c) Improving irrigation facilities
(d) Use of fertilizers and high yielding variety of seeds.
(e) Mechanization of agriculture is also another aspect of agricultural development.

Q8. What are Millets? List out the geographical conditions required for the cultivation of millets.
Ans: Millets are a group of highly variable small-seeded grasses, widely grown around the world as grains. Millets are also known as coarse grains. Geographical conditions required for the cultivation of millets are:
(a) These grains can be grown on less fertile and sandy soils.
(b) It needs low rainfall and high to moderate temperature.
(c) Jowar, bajra and ragi are millet crops grown in India.
(d) Major producers: China, India, Nigeria, USA, Brazil, etc.

Q9. State the geographical conditions favourable for cultivation of:
(a) Rice           (b) Wheat           (c) Cotton           (d) Coffee
Ans: Following are the geographical conditions required for the cultivation of rice and wheat:-
(a) Rice:
• Rice is the major food crop of the world. It is the staple diet of the tropical and sub-tropical regions.
• Rice needs high temperature, high humidity and rainfall. It grows best in alluvial clayey soil, which can retain water.
• Leading producers of rice in the world: - China, India, Japan, Sri Lanka, etc.

(b) Wheat:
• It requires moderate temperature and rainfall during growing season and bright sunshine at the time of harvest.
• It requires well drained loamy soil for its growth.
• Wheat is grown extensively in USA, Canada, Argentina, Russia, Ukraine, Australia and India.

(c) Cotton:
• Cotton is a fiber crop grown in tropical areas. Cotton requires high temperature, light rainfall, 210 frost-free days and bright sunshine for its growth.
• It grows best on black soil and requires at least 6 to 8 months.
• China, USA, India, Pakistan, Brazil and Egypt are the leading producers of cotton. It is one of the main raw materials for the cotton textile industry.

(d) Coffee:
• Hill slopes are more suitable for growth of this crop.
• It requires warm & wet climate and well drained loamy soil.
• Brazil is the leading producer followed by Columbia and India.
• In India coffee is cultivated in Karnataka, Kerala and Tamil Nadu.

Q10. Explain subsistence farming and Commercial farming. Draw a flow chart to define types of Farming.
Ans:
(a) Subsistence Farming: This type of farming is practiced to meet the needs of the farmer's family. Traditionally, low levels of technology and household labour were used to produce on small output. Subsistence farming can be further classified as intensive and primitive farming.
Primitive farming is further classified into two: Shifting cultivation and Nomadic herding.

(b) Commercial Farming: In commercial farming crops are grown and animals are reared for sale in market. The area cultivated and the amount of capital used is large. Most of the work is done by machines. Chemical fertilizers, pesticides, insecticides and high yielding variety of seeds are used in order to get maximum output.
Commercial farming includes commercial grain farming, mixed farming and plantation agriculture. 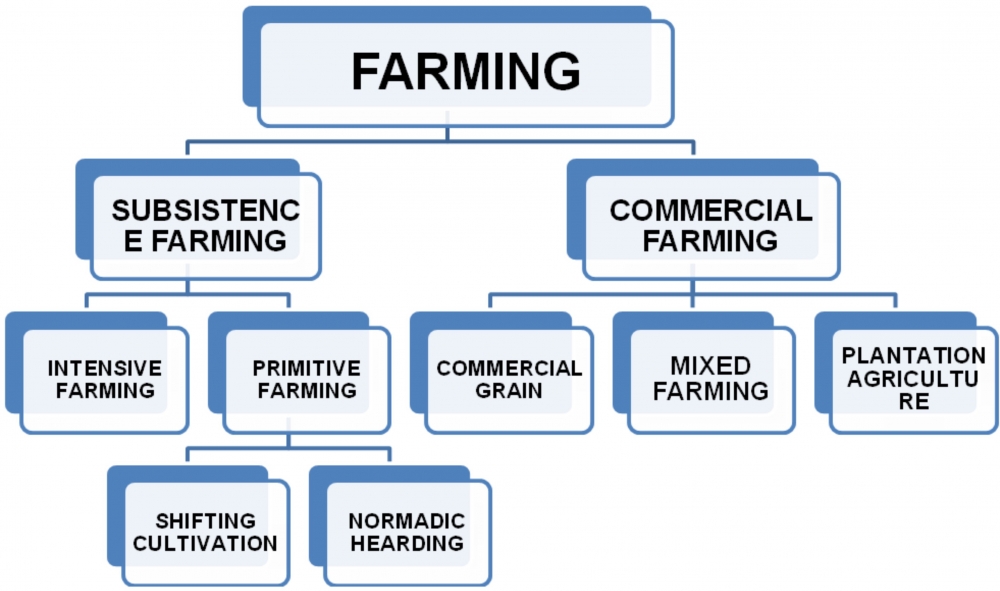