Q4. What is dew point?
Ans: Temperature at which air gets saturated is known as "Dew Point".

Q2. Why is atmosphere important for us?
Ans. Importance of atmosphere and various gases present in it are:
(a) Life giving gases like oxygen for breathing of animal kingdom and carbon dioxide is inhaled by plant kingdom.
(b) Ozone layer protects us from harmful ultraviolet rays of the sun.
(c) Tiny dust particles help in the formation of the rain droplets.
(d) It acts as a blanket which prevents the earth from becoming too hot during day and too cold during night.
(e) It protects us from falling meteors and other cosmic dusts. They burn when coming in contact with the atmosphere.
(f) Presence of gases, dust particles and water vapours lend colours to sky.

Q4. What is atmospheric pressure? How is it important to us?
Ans: The weight of air on the earth's surface is referred to as "Atmospheric Pressure". Atmospheric Pressure is a very important element of weather and climate. A difference in the air pressure defines the direction of wind flow and accordingly, brings changes in the weather conditions.

Q6. Define: (a) Breeze (b) Drizzle
Ans:
(a) Breeze: These are local winds which blow only during a particular period of the day or year in a small area. For example, land and sea breeze.
(b) Drizzle: Light rainfall in the form of very tiny drop of water is called "Drizzle". 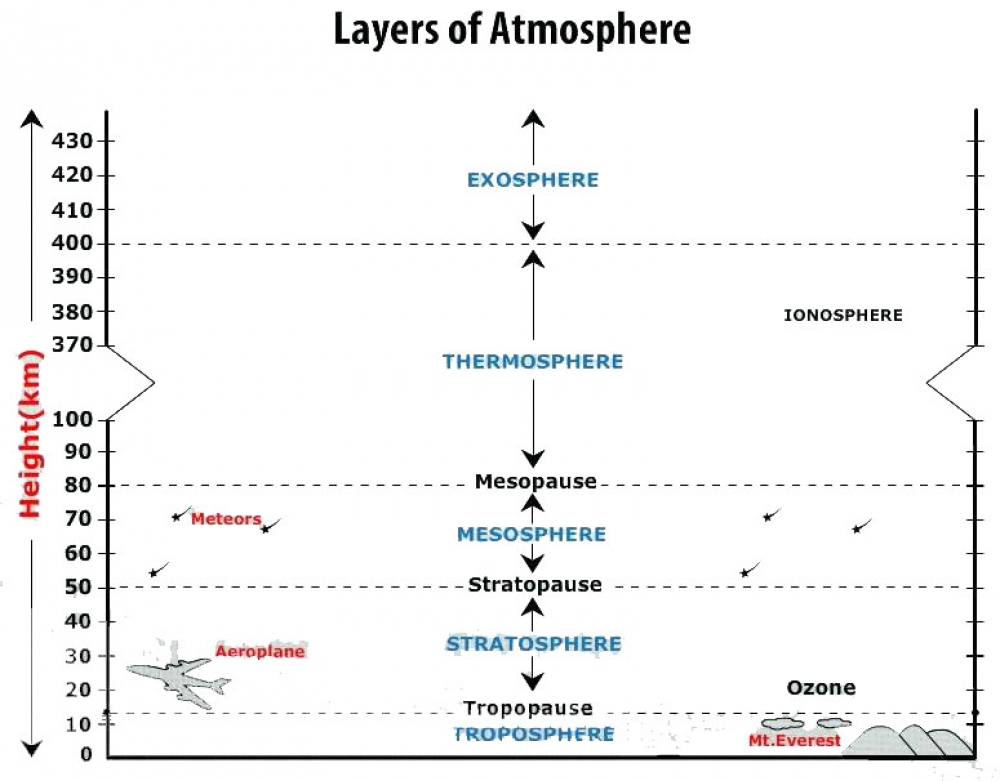 1. Troposphere:
• This layer is next to earth surface. It Extends upto 15 kms from the earth's surface.
• Temperature decreases at the rate of 1 degree Celsius from every 165 mtrs of ascent. This decline is known as normal lapse rate.
• Average height: 13 kms at poles and 18 kms over the equator.
• All weather changes take place in this layer. Oxygen exists in this layer.
• The boundary separating troposphere and stratosphere is known as tropopause.

2. Stratosphere:
• This layer is next to troposphere and it extends from 15 kms to 50 kms.
• This layer is free from weather changes, cloud formation and dust particles. Hence, this layer is ideal for the air transportation.
• Ozone layer is present here. Ozone layer absorbs/reflects the harmful ultraviolet rays of the sun.
• The boundary separating stratosphere and mesosphere is known as stratopause.

3. Mesosphere:
• This layer is next to stratosphere and it extends from 50 kms to 80 kms.
• Temperature again drops in this layer and can reach upto -100 degree Celsius at the upper boundary layer.
• The boundary separating mesosphere and ionosphere is known as mesopause.

4. Thermosphere:
• This layer is next to mesosphere and it extends from 80 kms to 400 kms.
• This layer contains electrically charged particles called ions, which are found at a height of 250 kms. Due to presence of these ions, this layer is also known as ionosphere.
• This layer protects us from the harmful radiation. Temperature increase with increase in height.

5. Exosphere:
• This is the uppermost layer above the ionosphere and it extends from 400 kms onwards and there is no end. It is a very thin layer and it merges with the space.
• This layer protects us from the harmful radiation.
• Temperature is very high. Light gases like hydrogen and helium float into space from here.

Q2. What are the different types of winds? Describe each giving examples.
Ans. Permanent or Planetary Winds: These winds blow constantly throughout the year in a particular direction. These winds are broadly classified as: -
(a) Trade Winds
(b) Westerlies
(c) Polar Easterlies

2. Seasonal or Periodic Winds: These winds change their direction in different seasons. The best example is "Monsoon Winds".

3. Local Winds: These winds blow only during a particular period of the day or year. For example, land and sea breeze. These winds bring short time changes in the weather conditions over a smaller area. Some of the examples are: -
(a) Chinook: Chinook means 'snow eater'. These winds are strong, warm and dry. They blow in North America.
(b) Loo: These are hot and dry winds which, blow during the summer season in the northern part of India.
(c) Sirocco: These are hot and moist winds, which blow from Sahara desert to Mediterranean Sea.
(b) Mistral: These are very cold winds, which blow down from the Alps over France.

Q3. Describe the different types of rainfall, Support your answer with appropriate diagram.
Ans. Rainfall can be classified into three types:
1. Convectional Rainfall: When hot air expands and rise to the upper layer of the atmosphere, condensation takes place which leads to formation of clouds. These clouds produce sudden and heavy rainfall. It's a daily feature in the equatorial regions.

2. Relief Rainfall: Relief rain occurs when warm air is forced to cool when it rises over a hill or mountain and then condenses. The other name for relief rain is orographic rainfall. The windward side of the mountains receives heavier rainfall in comparison to that of the leeward side (opposite) of the mountain receives little or no rain at all. It always produces a rain shadow effect.

3. Cyclonic Rainfall: When warm air mass and cold air mass meet, the warm air being lighter climbs over the cold air and cools down, leading to formation of clouds and then rainfall. This type of rain usually is due to the occurrence of cyclonic activities.

Q4. Why do places lying the windward side get rainfall while the leeward side remains dry?

priyanshu01 September, 2016Thanks who made it

Apoorva Shukla 14 October, 2018Very nice and useful answers, thanks to you

Rythm 21 November, 2018Thanks for giving

Aditi16 September, 2019Thanks all questions and answers match from my book

Simran Kumari01 August, 2020Thanks. For help in the study

GOBINDA11 September, 2020Thanks it helped me lot